The Kawānanakoa ʻOhana and a Moʻokūʻauhau of Aliʻi Trusts – Tina Kaleiwahea

The trust of James Campbell’s estate dissolved in 2007 distributing $2.3 billion to heirs of this 19th-century capitalist. James Campbell made his fortune via agriculture in the Hawaiian Kingdom. Now, his descendants could, near single-handedly, bring about a Pae ʻĀina that could grow enough ancestral food to feed the lāhui in perpetuity, if they so choose to join a legacy of aliʻi trusts.

To the members of the Kawānanakoa ʻohana: please endow your estimated $1 billion net worth from the James Campbell trust to the lāhui. This is not a call out; this is a call in. In the context of our ancestral history, we can see the aliʻi trusts in existence today were not bestowed upon the lāhui in a sporadic fashion. They represent a methodic, collective vision for millions of kānaka ʻōiwi yet unborn. A moʻokūʻauhau of aliʻi de-privatizing their substantial wealth into perpetuity is what the Lunalilo, Pauahi, and Liliʻuokalani trusts constitute. The Kawānanakoa ʻohana can heed this ancestral kāhea to take your place in this specific genealogy as some of the only Kānaka uniquely able to endow substantial capital in contemporary times.

James Campbell was Loyal to Queen Liliʻukalani; The Kawānanakoa are Descendants of Both

Campbell was not your typical haole plantation owner. He never became a Hawaiian Kingdom treasonist like most 19th and 20th-century haole capitalists we’ve become accustomed to. In a short biography written by the Estate of James Campbell, Campbell was said to be “a partisan of Queen Liliʻuokalani…and remained a Royalist to the end of his days”[1]. As an aside, it is quite impressive that James Campbell Company LLC, a for-profit real estate company, houses this description of their founder when most 21st century Hawaiʻi corporates assert neo-colonial language. While briefly so, Queen Liliʻuokalani speaks of Campbell fondly and even mentions Abigail Campbell, the wife of James Campbell, caring for the Queen during her imprisonment[2]. Perhaps Campbell remained loyal to the Queen since Abigail was ʻōiwi or because he was an Irishman, not an American, but we’ll save that story for another time.

The Kawānanakoa of today are the progeny of David Kawānanakoa and Abigail Campbell, daughter of James Campbell. David Kawānanakoa, along with his brother, Jonah Kūhiō Kalanianaʻole, became a prince under Mōʻī Kalākaua’s reign. In contemporary times, the Kawānanakoa have been critiqued for overextending the claims of their lineage. Queen Liliʻuokalani, in her biography sparsely mentions the aforementioned princes. She does, however, refer to Prince Kalanianaʻole as her cousin and also discusses Prince Kawānanakoa’s participation in negotiations with the US to withdraw the treaty of annexation[3].

Whether the Kawānanakoa descendants look to their Campbell or Kawānanakoa lineage, they will see onipaʻa for the Hawaiian Kingdom and Queen Liliʻuokalani who lives on in the lāhui today. It would only be a natural decision for them to endow their wealth given their historical position.

A New Hanauna in the Moʻokūʻauhau of Aliʻi Trusts

One Kawānanakoa has, no doubt, made herself a part of this genealogy in present times: Abigail Kinoiki Kekaulike Kawānanakoa. Albeit a controversial figure, she is virtually the only Kawānanakoa to have entrusted her distribution from the James Campbell Estate to ka poʻe Hawaiʻi after her death. However, her non-ʻōiwi wife continues to make attempts to divert some of Abigail’s $200 million to herself[4][5] and sell invaluable Native Hawaiian possessions[6].

Others have, at much smaller scales, established foundations. The James and Abigail Family Foundation was established in 1980 and funds community grants, although not exclusively for ʻōiwi. The endowment assets were valued at $21 million in its 2018 annual report[7]. It’s unclear which of the Kawānanakoa are contributors to this foundation, though Edward and Quentin Kawānanakoa, as well as Kapiʻolani Marignoli, are named in said report. They are appreciated for their start but need to take it much further. Ronald Olson, James Shingle, Louise Stevenson, and Muriel Lighter are some of the known beneficiaries who have received approximately $100 million or more from the James Campbell Estate[8]. It is hoped that those who know these individuals start discussing the prospect of endowing their wealth for the lāhui.

A Proposal: Ancestral Food Grown in Hawaiʻi to Supply the Lāhui in Perpetuity

Bear with me for a little finance speak. 5% of the $2 billion Campbell Estate distribution is $100 million. 5% is considered a conservative, annual return on investment. For reference, the stock market returned 16.3% in 2020, even in the midst of a pandemic[9]. The historical average annual return on the S&P 500 since 1957 has been 8%[10]. While there are liquidity and control considerations to be had as in pertains to the Kawānanakoa shares in James Campbell Company LLC, there is no doubt the Kawānanakoa could continue to live large, say, receive payment of $10 million / year, and still afford to theoretically disburse $90 million / year to the lāhui. The  Kawānanakoa are urged to take bold action especially since 13.5% of the lāhui lives in western induced poverty.

In my research, I have estimated that it would cost $300 million annually, under today’s market conditions, to grow enough kalo to feed every person in the lāhui. Even an annual $50 million, half of the $100 million mentioned, would propel us toward a self-sustaining future of wellbeing in the relative near future. I consider ancestral food grown in Hawaiʻi to be low-hanging fruit in creating a robust infrastructure of aloha ʻāina. As a comparison, I have estimated that healthcare for all in the lāhui would cost $6 billion annually, which, for context, rivals what the settler State of Hawaiʻi collects in tax revenue annually. Ancestral food for all is more financially feasible in today’s terms and is, quite frankly, more proactive than western medicine for purposes of healing our lāhui.

Though a proposal for the restoration of our agricultural abundance in the Hawaiian Kingdom was offered, there are many other workable possibilities. The hope is that this provides a vision for what an immense impact the Kawānanakoa can have in creating economic agency for our people by endowing their assets.

I was told to bring myself into my writing by our Kumu Kūhiō Colleps, which I am admittedly trained not to do as a finance, accounting, and information technology management student and practitioner. I also fail to have a personal ʻano because an upbringing by a single mother in low SES, citified Honolulu removed from Native Hawaiian culture, demands hardness. Perhaps, though, my interest in decoding kālā is a direct result of it being rare to come by in childhood. I wouldn’t change these experiences if I could, though. I want to give what I’ve learned in western finance to the lāhui, especially those keiki whose fathers are felons like mine or whose mothers were on welfare like mine. I see them getting it how they live to survive in this urbanized, American manufactured poverty. I’m driven by them. If my kuleana to the lāhui were a superhero, it’d be the “bad” Black Panther because I am disinterested in Wakanda if it isn’t for all of our people, not just the elitist few.

This disposition has caused me to endeavor, while I balance my accountant day job, in taking seriously the future of the Hawaiian Kingdom political economy. My research up to this point has quantified the cost of providing certain economic supports—healthcare, housing, child care, to name a few—to every Hawaiian Kingdom citizen, which of course mirrors the very progressive nature of our Kingdom in the 1800s. I also have laid out a critique of the hegemonic analysis of Hawaiʻi’s historical economy that has been dealt with, solo, by American classical economists. Lastly, I offer a framework for aloha ʻāina political economy in a de-occupied Hawaiian Kingdom that bypasses what I consider a distracting, western capitalism vs. socialism debate by analyzing moʻolelo from our ancestral economy and extrapolating it to present and future contexts. I’m currently pondering a Ph.D. because, although I plan to adhere to a finance path in the private sector, I know the research question requires rigorous, ongoing pursuit.

I hope to help ʻōpio in the lāhui who are dealing with what Dr. Kamana Beamer calls “complex identities”, particularly as it relates to being both a financier and Hawaiian Kingdom patriot. Maybe in the kanaka realm, we are few and far between, but many of our kūpuna have mastered these particular roles. I am not an expert. I am still studying to earn my certified public accountant license and had only just begun the Master of Science in Finance program last year. But if this speaks to you and you want someone to hash it out with, I’m here. I feel the Hawaiian Renaissance we are living in right now will soon unfurl a wave of aloha ʻāina economists, among many other important thinkers and practitioners.

The topic of this blog, aliʻi (lāhui) trusts, represents my most recent and tentative area of research. My writing has focused on a future Hawaiian Kingdom economy that is self-sufficient and regenerative. But I have not yet committed to paper a bridge there, which I believe to be the expansion of the aliʻi trusts. There should be more aliʻi trusts, including that of the Kawānanakoa. This approach does not negate strategies to compel the settler state to deoccupy our institutions or return unceded crown lands it has stolen. Rather, it runs parallel–a different means to the same end. By creating conditions of economic independence, our legal independence will grow in its self-evidence.

I have analyzed the largest of the trusts, Pauahi’s Kamehameha Schools, and have concluded that the portfolio has been well managed notwithstanding trustee mishaps in the 1990s. It has fended off settler attempts to force land sales and the disbandment of its mission—to exclusively serve ʻōiwi, the rightful and only beneficiaries. KS has its faults, but I argue against those that demand Kamehameha Schools distribute its assets on anti-capitalist grounds. I do not believe capitalism has a place in the Hawaiian Kingdom, as someone who has studied abroad in Denmark where capitalism is openly problematized. However, I see using capitalism against itself as a viable, long-term strategy as long as it continues to dominate our everyday lives in Hawaiʻi.

With that said, I lack in methodologies outside of business and economics and would love feedback/critique. I plan to look into the Ward, Damon, and many other ʻohana to quantify their wealth. The Estate of Samuel Mills Damon, for example, developed an $800 million fortune partly due to the many acres of land bestowed onto Damon by Ke Aliʻi Pauahi. I do not have training in legal research aside from US tax-related code and cases. Please email me if you would like to share manaʻo. 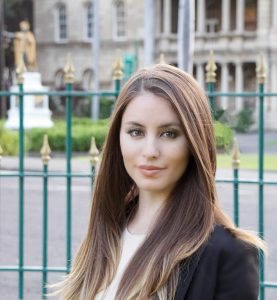 I am from the Honouliuli ahupuaʻa on Oʻahu. I am a senior majoring in Finance, Information Technology Management, and Accounting. My research interests include financial and philosophical examinations of a future aloha ʻāina political economy in a post-occupied Hawaiian Kingdom.

Why is research important for Native Hawaiians?

Research is something our kūpuna have always excelled at. Moʻolelo is a hypothesis. Kilo is experimentation. Intergenerational knowledge is a peer-review process.

What is one thing you’ve learned from your project?

Iʻve been blessed to spend time discerning what comprises an ʻōiwi political economy (which by default includes regenerativity and resilience) without being dependent on western concepts—whether they be from Adam Smith or Karl Marx of past centuries or their “green” counterparts in contemporary times.

The Stories of COVID-19 Jasmyne Kaleimakana Lewis Sociology Over the past year, Covid-19 has been…