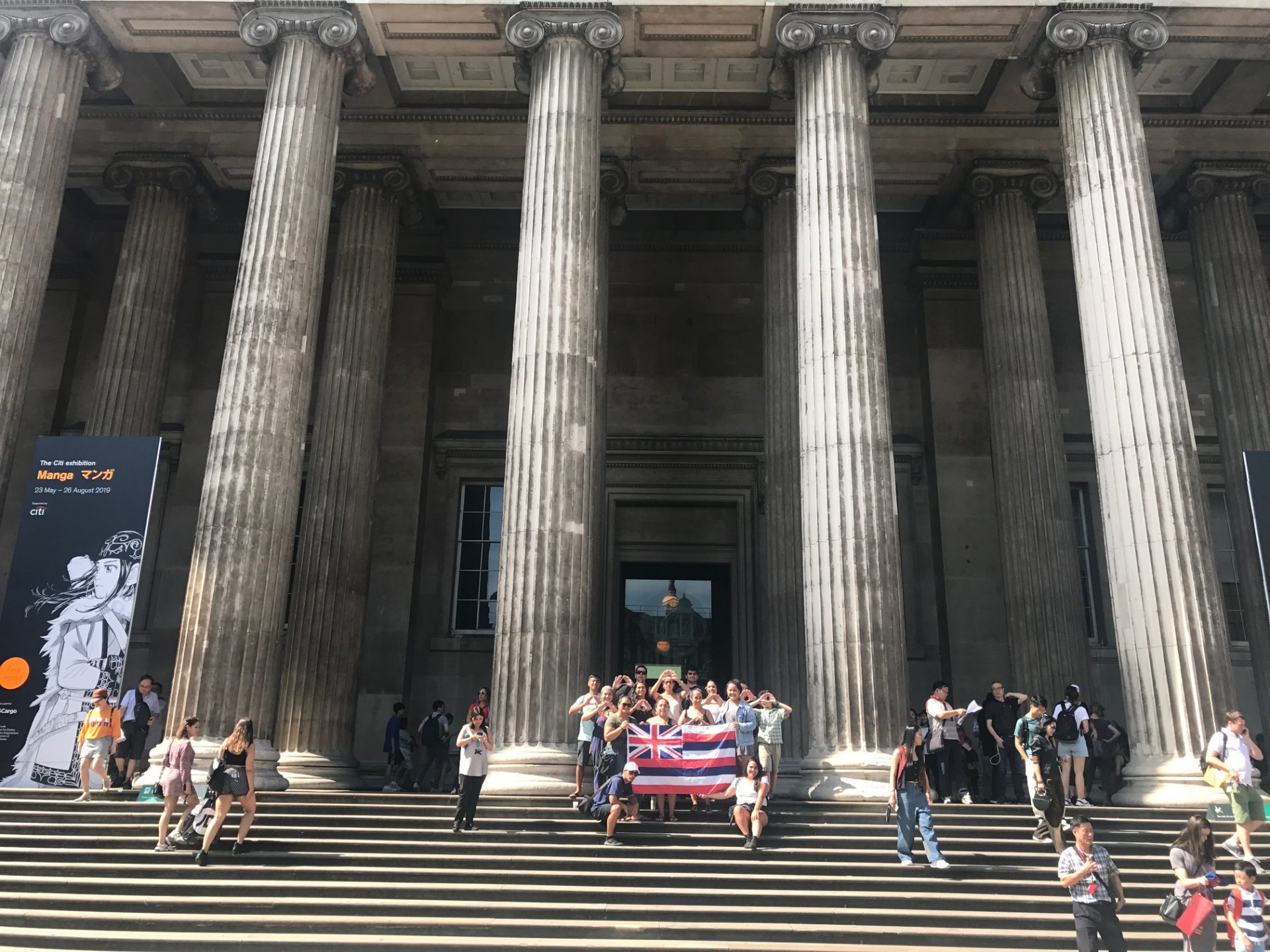 On September 15, 1884, Prince David Kawananakoa boarded the Mariposa for San Francisco as part of the Hawaiian Youths Abroad program (HYA). He joined Thomas P. Cummins at St. Matthew’s Hall, an acclaimed military training academy in America. Six months later, Prince Kawananakoa’s two brothers, Prince Kalanianaole (Kuhio) and Prince Keliiahonui boarded the Alameda and sailed towards America to also attend St. Matthew’s academy. Although Kuhio and Keliiahonui were not officially listed as Hawaiian Youths Abroad participants, the addition of King Kalākaua’s nephews outside of the program illuminates his understanding of obtaining ʻike abroad to ensure the Kingdom remains an independent nation-state.

Hawaiʻi is currently under U.S. occupation that is secured through the militarization of the Pae ‘Āina. At first glance, the number of Hawaiian youths sent abroad to military academies were alarming considering my current life experiences with a belligerent American military in occupied Hawaiʻi today. Why did Kalākaua send six of the official HYA participants and his three nephews to military academies in America and others to Italy? To better understand the context of Kalākaua’s interest in acquiring military ʻike, I offer a brief history surrounding Kalākaua’s reign to demonstrate the Hawaiian Kingdom’s understanding of and engagements in international relations.

In the mid to late 1800s a ‘new imperialism’ plagued Oceania and much of the globe, which is characterized as a period of colonial expansion by European powers and the United States. During this wave of new imperialism in 1843, the Hawaiian Kingdom attained the status of an independent state protecting its sovereignty with international law.This punctuation in Hawaiian Kingdom history remains in continuity today as the United States of America continues to illegally occupy Ko Hawaiʻi Pae ʻĀina.

While in other parts of Oceania, the British colonized Aotearoa in 1840 and then Fiji in 1874. France annexed Tahiti in 1880. America and Germany began to take interest in Samoa in 1880. During the 1880s the Hawaiian Kingdom also began planning an attempt to create a Pacific Confederacy to provide protection against these aggressive imperial forces in Oceania. Considering the superior military resources of these imperial nations in the 1880s, King Kalākaua’s attempt to form a Pacific Confederacy and also sending HYA participants abroad was a necessary move to protect the continuity of Hawaiʻi’s independence. Furthermore, Kalākaua’s investment in  obtaining military ʻike represents an understanding of global politics and Hawaiʻi’s unique political position in the Pacific.

With this in mind, I want to illuminate the Hawaiian Kingdom’s diplomatic and political prowess, attaining the status of an Independent state in 1843. This punctuation in Hawaiian Kingdom history remains in continuity today as the United States of America continues to illegally occupy Ko Hawaii Pae Aina. The “Bayonet” Constitution in 1887 is also a punctuation in our history, drastically shifting Kingdom international relations, thus creating roadblocks for programs such as HYA. Although the Bayonet Constitution serves as a major political event in Hawaiian Kingdom history, I want to avoid handing over our Mōʻī’s agency to the all too common ‘fatal impact’ historiographies. The fatal impact history flattens out the complexities of Kingdom politics and their engagements in international relations. At the same time, I acknowledge the effects of Cook’s arrival on Hawaiʻi’s shores and the missionary’s presence in both politics and daily Hawaiian life. However, our history and encounters with Euro-American peoples and ideologies were not and is still not a one-way street.

Two years after the 1887 “constitution,” King Kalākaua’s sending Prince Kawananakoa, Kuhio, and Princess Kaʻiulani abroad despite the ill effects of this illegal constitution reminds us of our agency. Furthermore, Kalākaua writes a letter approving Princess Kaʻiulani travel to England to attend Great Harrowden Hall. More importantly, Kalākaua writes that the Princess is to travel entirely ‘incognito’ perhaps a reference to a diplomatic mission in a precarious time. In the same year, Prince Kawananakoa and Kuhio are also sent to England to continue their education by enrolling in Royal Agriculture College in Cirencester, England. In this light, I consider Kalākaua’s sending of royalty to England for education as a diplomatic mission in which once again Hawaiians seek reprieve from the international community after an internal revolution spearheaded by Hawaiian nationals of American descent.

This brief analysis of the HYA program demonstrates that education and striving for new ʻike for Kānaka Maoli have always been political. Taking this into account, I want to shift towards a critique of our current Euro-American education paradigm—the classroom setting. For me, Hawaiian education and ʻike seeking is a process of world-making that demands interaction and observation outside of the classroom and many times into foreign places and spaces. David Chang (2016) provides a new perspective of Kānaka Maoli process of world-making stating, “Rather, Kānaka understood the world in ways that centered their own perspective and encouraged them to look out from that perspective with confidence to seek still greater knowledge. A heritage of exploration favored a drive toward exploration.” Chang’s positioning of Hawaiian exploration within a longer genealogy of education and ʻike illuminates the current limitations of the classroom setting and also serves as a launching point in the rethinking of surfing and its connection to both education and exploration.

In 1885 Prince Kuhio, Kawananakoa, and Keliiahonui surfed on their redwood papa olo (a surfboard traditionally reserved for Aliʻi) at San Lorenzo river mouth during a break from St. Matthew’s Academy. In 1890, Prince Kawananakoa and Kuhio surfed in Yorkshire while attending the Royal Agricultural College as Kalanianaole wrote to Henry Armstrong a Hawaiian consulate, “We like it very much for we like the sea to be rough so that we are able to have surf riding. We enjoy surf riding very much and surprise the people to see us riding on the surf…Even Wrightson (the princes’ tutor) is learning surf riding.” As an avid surfer, I view the actual action of sliding down a wave as a small part of the larger process of surfing. Furthermore, I want to use again Chang’s perspective of engaging in exploration as a process of world-making and the process of surfing is indeed a form of this exploration. I imagine the process of sourcing the wood, milling the planks, shaping the boards, and then surfing as a form of both exploration and adaptation of foreign lands while abroad on these diplomatic missions.

Today on Lā 7 we visited the Royal Observatory in Greenwich and the British Museum’s exhibit on Captain Cook.The Royal Observatory claims to be the “home of time and space.” With the completion of construction in 1676, this observatory has continually trained astronomer to both “discover” and then conquer new lands through the mapping of longitudes. Staring at the famous Greenwich meridian line, I begin to question its validity as a tool for navigation considering our kūpuna were traversing Oceania far before a European line divided globe into more “manageable” hemispheres for navigation. The long imperial genealogy of astronomy as a benign science of discovery has contributed to, what I believe, the largest and most organized Kānaka Maoli movement in history—the Maunakea struggle against the Thirty Meter Telescope (TMT). The movement to halt TMT construction has never been against science or education but rather who gets to imagine and enact Hawaiʻi’s futures. In this light, I want to illuminate not just the ‘fake state’ but how the state is literally occupying our Hawaiian Kingdom created bodies of governance. With worldwide attention on our struggle now is the time to begin to heavily question how the occupation creates the conditions of possibility that allow for our institutions to be controlled by untrained diplomats. We must remember that Kānaka Maoli have always influenced the rest of the world whether it be the first non-white independent state to the creation of HYA a unique program interweaving education and diplomatic missions for the future of Hawaiʻi. And, now with TMT, we are showing the rest of the world how to stand up against the violence of these sciences while also disrupting and potentially ending the longest military occupation in history.

Sitting on the other side of the world, I was offered the opportunity to see the origins of TMT’s imperial science. Now, I can say with confidence that the Royal Observatory and it’s 1884 Greenwich meridian conference operates with the same mentality of TMT and that is they believe they have the right to speak for the world. For me, I compare this to HYA and how our interactions in the international arena always carried a kuleana which was to return home and serve the Kingdom. The day after Prince Kawananakoa and Kuhio leave for England an article in the Hawaiian newspaper is published titled, “NA KEIKIALII IMI NAAUAO” which reminds us of our kuleana to return home and “Kulia i mua i ka naauao a lanakila!”

Chang, D. A. (2016). The world and all the things upon it: Native Hawaiian geographies of exploration. Minneapolis: University of Minnesota Press.

SurferToday.com, E. A. (n.d.). The inconvenient truths about the surf industry. Retrieved July 23, 2019, from https://www.surfertoday.com/surfing/the-inconvenient-truths-about-the-surf-industry