Today, July 19, we traveled to Windsor Castle for a special visit arranged with the Royal Archives staff. We arranged for this visit primarily to see the original letter from Kamehameha I to King George III in 1810. The Royal Archives is physically housed in one of the oldest parts of Windsor castle. The soaring tower, more than 200 feet in height, was renovated to house the special archives of the British Crown. The archive included the “Georgian” and “Victorian” collections, along with other Crown documents, differentiating it from the National Archives we visited yesterday in Kew Gardens. Our group was divided in to two groups, each spending an hour with Bill and Allison of the Royal Archives team, who beautifully displayed about a dozen documents pertaining to the Hawaiian Kingdom and the relationship that our aliʻi fostered with the British Crown. 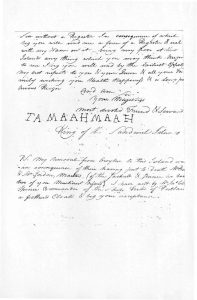 Absolutely no photos were allowed in the archives, making the experience even more surreal and special to take in everything we could in the moment. It was an emotional experience, viewing one of the oldest remaining diplomatic letters from King Kamehameha I, which included his original signature (TAMAAHMAAH). The condition of all these rare items were impressive, evidence of the great care employed by the Royal Archives team. Among other documents on display were personal letters between Queen Victoria and Queen Emma. Also included were Queen Victoriaʻs  personal journal entries about Queen Emma, who stayed at Windsor Castle on November 27, 1865. In addition to Queen Victoria’s journal were correspondence by the British Crown about Kalākaua. Also of great interest were the original seating charts and procession for the Queen’s Jubilee in 1887, commemorating 50 years of Queen Victoria’s reign. The British Queens guests of honor included Queen Kapiʻolani, Princess Liliʻuokalani and Colonel Curtis Iaukea. Both the seating charts and procession arrangements listed the names of the Hawaiian delegation. According to the Royal Archives staff, the Hawaiian representatives were arranged in very prominent and important seats, alongside other leaders of the world at the time. As makana, we gifted our archive hosts with ʻoli and hae Hawaiʻi pins from ʻIolani Palace, a fitting gift considering the archival teams many inquiries about the storied relations between our two countries, including our flags.

Kalakaua visited England from July 6th through the 24th, spending a little more than two and a half weeks in London. Throughout his stay, he stayed at Claridges Hotel (https://www.claridges.co.uk). Although Kalakaua was not presented to the Queen immediately, throughout his letters he writes highly of her graciousness, saying:

Her Majesty the Queen was most kind to us, sending her carriage and offering us her box at the Covent Garden Opera, when she heard that we were going there… Though we were not officially presented at the Court of St James, still she extended to us privileges which we did not expect to receive and while Her Majesty’s carriage passed our carriage she noticed us by a most gracious bow and again to my two gentlemen who were with me on the carriage.

On Sunday, Kalakaua visited Westminster Abbey and joined the congregation in the services in the morning, which he described as “very beautiful and impressive.” Later in the day, they sailed up the River Thames with four other ladies and gentlemen of the English court in the afternoon and then had dinner at the Maiden Head with Lord Charles Beresford, Lady Claudi Hamilton and Lady Leister and Mrs. Paget. He stayed out quite late, only returning to Claridges Hotel at midnight.

On July 9th, King Kalakaua was presented to Her Majesty Queen Victoria at Windsor Castle by the Earl Granville, Secretary of State for Foreign Affairs. Kalakaua writes of this meeting, “All in the room made a very low and gracious bow. I made a most profound one. And another. She came up to me and took my hand and then sat on a sofa asking me to sit down on a chair facing the sofa near her. All the gentlemen of the Court stood in perfect silence when the conversation took place between Her Majesty and myself.” Received extremely graciously, especially, as it would come to pass, in comparison to his French reception the next month, the two chatted pleasantly for a while together, talking of the details of Kalakaua’s voyage, the Duke of Edinburgh, complimenting Kalakaua’s English, and Queen Emma, amongst other topics that he could not remember as he was “quite electrified and monopolized the whole of the conversation that took place during the interview.” After this meeting, Kalakaua was taken to tour Windsor Castle.

After lunch, H.R.H. Prince Leopold and H.R.H. Prince Hesse of Darmstad took Kalakaua and his party on a tour around Windsor Castle, which he praised:

Oh! Sister I wish you were here to see the beauties of Windsor Castle and the old relics that the ancient and noble pile contained. It is really a grand and interesting.

When they left the castle, they visited St. Georges Chapel and a Memorial Chapel built by the Queen commemorating the death of the late Prince Consort. The next day, they visited the Crystal Palace, where an estimated 60,000 people were present, and toured the grounds. Kalakaua particularly picked out the panorama of the Siege of Paris as the most interesting scene of that afternoon. Kalakaua was invited by Lord and Lady Spencer to an evening party to meet the Prince and Princess of Wales at Kensington Museum, which he described as “more than an Evening party, it was a soiree… the party was of the most brilliant of the season and the elite of the English Aristocracy was [sic] dressed in the most elaborate style,” where he met the Prince & Princess of Wales, the Prince of Germany and the Princess Royal of England The Duke of Cambridge, Princess Mary of Cambridge with her husband Prince Teck. H.R.H. Princess Luise and Lords and Ladys in Waiting upon the Royal family. Describing how each of them took to pairs to greet the Princess Royal and the Princess of Wales passed through the assemblage, curtsying and bowing. The evening, he describes, was one of his proudest moments as he had the “honor and pleasure of walking under my arm the future Queen of England, who is very much beloved and respected by all classes.” Kalakaua was especially impressed by English nationalism that the people showed towards her, noting it as truly patriotic.

A postscript note adds other activities that Kalakaua and his party enjoyed, including a visit to the Royal Stables and the Queens Coach Rooms, the horses, he noted, “were magnificent”. A trip to the Albert and Victoria Hall to a concert, where Mademoiselle Patti performed opera to a crowd of 12,000 people. Attending the Arch-Bishop of Canterburys Garden party.

Kalakaua omits details regarding his trip, however, an interesting aside he makes July 24th, 1881 is in regards to a new uniform design. He details the change of the cross-belt to velvet with a gold taro leaf embroidered, with a sash, sword belt and side lacing of the pants in gold. Nothing the cheapness of the cost of the uniforms, Kalakaua additionally points out that the design is meant to differ from those uniforms of other countries to add a distinctly national feature. His consideration towards nation and people is evident even in these small details, where he notes that uniform as “rich, simple and cheap; within the limits that the two staffs can afford to pay.”

Overall, Kalakaua notes to his sister about his overall impressions of London:

exceedingly pleasure with everything I have seen in London. The people are so hospitable and kind and I only wished one of you were with me.

By Anianikū Chong, UG Student in Art & Hawaiian Studies On the morning of July…