Alga of the Month January-February 2020

Sargassum aquifolium, a species of limu, is an alga native to the Hawaiian islands, and is 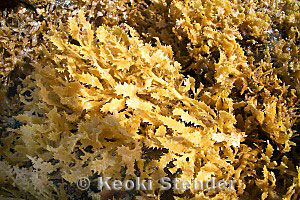 an important component of the Hawaiian islands’ ecosystem, as well as the local cultures.
This large, brown seaweed is edible, and is commonly used in sacred ceremonies among native Hawaiians. In one such ceremony, each person involved in a quarrel or dispute receives a piece of this kind of limu, and pray for forgiveness and peace. The ceremony is not complete until each individual involved has forgiven every other person in the space, and peace is restored.
In the ocean, S. aquifolium can stretch along the surface of the ocean for miles. It is kept afloat by beads called pneumatocysts that are filled with mostly oxygen; thus, it is never attached to the seafloor. On the surface, this seaweed serves as a habitat, a source of food, and a breeding ground for a multitude of marine organisms. For this reason, S. aquifolium became established as a protected alga in 2003.
Once the seaweed eventually sinks to the ocean floor, it continues to serve benefits to the creatures of the deep ocean as a source of carbon. This is where S. aquifolium becomes a large component of the deep sea food web.
To learn more about threats to S. aquifolium and other limu species and find out how to help, go to: https://dlnr.hawaii.gov/ais/invasivealgae/.