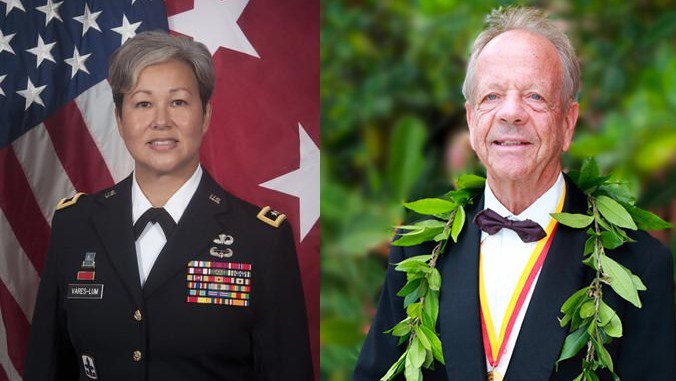 When University of Hawaiʻi at Mānoa German Professor Niklaus Schweizer recently attended the Inaugural Ball of the Consular Corps of Hawaiʻi as consul emeritus of Switzerland and corps historian, he had an unexpected reunion with a former student. Maj. Gen. Suzanne P. Vares-Lum, mobilization assistant to the Commander, U.S. Indo-Pacific Command at Camp Smith, made a special effort to speak to him and spoke in “perfect” German, Schweizer noted.

Having Vares-Lum among your former students would make any professor proud. She has, after all, earned numerous awards and accolades throughout a distinguished military career. Vares-Lum, though, in her inimitable way of serving others, wanted Schweizer to know just how much he influenced her. It seemed she had waited more than three decades for this moment to express long-held thoughts and gratitude to him. Vares-Lum credited Schweizer and the German language program for catapulting her into a stellar career. Her heartfelt words were a special gift to Schweizer that he will cherish forever.

She recalled, “When you walked into class with Professor Schweizer, you entered a new world—you were transported to Germany and spoke only German. Even if you weren’t quite sure what he was saying, it didn’t impact him, he continued right on without embarrassing you. He knew that you would get it eventually.”

“He made us read difficult German literature, which forced us to study and use our dictionaries to even begin to understand,” Vares-Lum added. “Although I really must say it was challenging for me because as soon as you walked out of class, you no longer heard German and you could easily forget. Professor Schweizer never made me or anyone else feel judged or small. He always smiled and encouraged you to not give up.”

Besides taking German courses and majoring in journalism, Vares-Lum was enrolled in the UH Mānoa Army ROTC program. She went on to become that program’s first female general officer. The 1989 graduate of UH Mānoa then became a second lieutenant whose first duty station was in Wuerzburg, Germany. While there, she conversed in German, allowing her to successfully carry out business. Eventually, she became the platoon leader of military intelligence soldiers who served as German and Russian linguists.

Vares-Lum also considers the UH Mānoa courses she took a special gift that enriched her life. The Wahiawā, Oʻahu native holds German people and culture near and dear to her heart to this day. She has life-long friends in Germany and misses many things, including her favorite sauerbraten, the traditional marinated roast.

If you enjoyed this article, please consider sharing it!