That whitetip kept coming back every day.

The small reef shark circling Pelekane Bay caught Stephen Matadobra’s eye even before the UH Mānoa undergraduate had heard about the legend.

Matadobra, a marine biology major, was taking a field archaeology course on the Big Island of Hawai‘i. He learned that this bay on the Kona coast adjacent to the Pu’ukohola Heiau National Historic Site was thought to be the location of another temple, now submerged.

According to local lore, it was the site of a sacred Hawaiian shark heiau, where offerings were once placed on a large stone altar before the gods. They called it Hale o Kapuni. 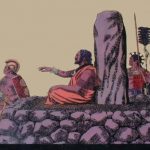 But no one had been able to confirm the heiau’s existence, not even the U.S. Army Corps of Engineers. The agency had tried back in 1994 but considered its results inconclusive. Sediment from the construction of a nearby harbor had buried any sign of the temple.

“The last known image was taken in 1956, during a tsunami event,” said Matadobra. A grainy black-and-white revealed stone debris, temporarily visible as the ocean subsided. “That picture and other anecdotal evidence indicates that the heiau should be right there,” about 100 feet offshore, he said.

With support from the UH Mānoa Undergraduate Research Opportunities Program (UROP) and guidance from mentor Hans Van Tilburg from NOAA, Matadobra returned to the Pelekane Bay with a sub-bottom profiler device to see what he could find.

“It’s like a really fancy fish finder,” Matadobra laughed, who conducted his field research in March 2014. The sub-bottom profiler is used to propagate sound waves across the water to pinpoint anomalies—anomalies that in this case could be the foundation of a long-lost structure, buried in loose silt.

Matadobra ran 18 surveys tracing 150-foot-long transects across the bay. With this data, he was able to identify 16 candidates for further review. Thirteen of the anomalies fell within a well-defined rectangle 20 feet by 40 feet.

Are these rocks the true remnants of the shark heiau?

Matadobra thinks so. “The sub-bottom profiler data matches the shape and size of the proposed shape of the heiau,” he said.

In June 2014, Matadobra submitted a report for the National Park Service (NPS) recommending additional research to confirm the presence of the heiau, including perhaps using invasive cores to determine what lies beneath bay’s sediment layer.

In the long term, Matadobra says he would love to see the shark heiau reconstructed using local stones and other materials, similar to what was done for the Pu’ukohola Heiau itself.

As for his own future, Matadobra is not handing over his fate to the shark gods. Instead he is training to become a diver medical technician. Matadobra is currently working at the John A. Burns School of Medicine (JABSOM) hyperbaric treatment center and finishing up his degree requirements this summer.