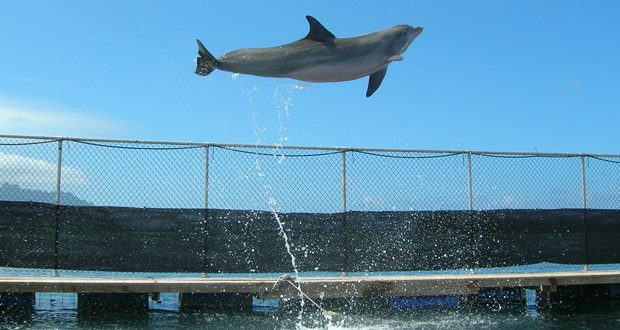 Three marine mammals that have been involved in hearing and underwater noise studies at the University of Hawaiʻi at Mānoa for more than 20 years have been relocated to Sea Life Park. Kina, a 40-year-old female Pseudorca; Boris, a 26-year-old male Tursiops and BJ, a 29-year-old female Tursiops, came to UH with Paul Nachtigall in 1993, when he founded the Marine Mammal Research Program at Coconut Island in Kāneʻohe Bay.

Before 1993, the animals and Nachtigall did research work at a Navy Laboratory in Kāneʻohe Bay, where Boris and BJ were born. Over the years, international scientists have been keenly interested in research on the trio, which involves their hearing and echolocation capabilities. However, it costs nearly $900,000 per year to provide the Pseudorca and two Tursiops with veterinary care, food and professional training.

“It was challenging for the university to pay all needed expenses for Kina, Boris and BJ, so Sea Life Park agreed to take excellent care of them,” said Nachtigall. “One should only keep marine mammals if one can afford outstanding veterinary care, the best possible food fish and pay superb trainers to care for them. Because the life span of these marine mammals is about 50 years, we wanted to ensure that this arrangement is a win-win situation for both our animals and marine research.”

A familiar face will greet Kina, Boris and BJ at Sea Life Park: Jeff Pawloski, who was their trainer at both the Navy Lab and UH, is now working at the park and will continue to be involved with their care.

The Marine Mammal Research Program became the world’s leading cetacean hearing effort examining whale and dolphin hearing during the past 20 years. Nachtigall and his colleagues measured the hearing of five new species of whales and dolphins and the polar bear and determined safe sound exposure levels for dolphins. Their work will continue and stretches from Hawaiʻi to oceans off Iceland, Spain, Russia as well as China and the Philippines.