[VIDEO] Seeding the future of the ʻōhiʻa tree 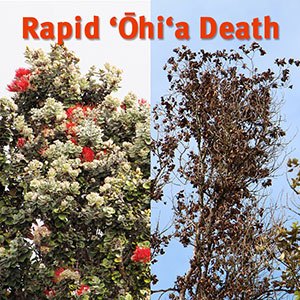 The Hawaiian ʻōhiʻa tree forest is under attack. The once lush forest is scattered with the white skeletons of dead ʻōhiʻa trees. A devastating disease called Rapid ʻŌhiʻa Death, or ROD, has decimated more than 34,000 acres on Hawaiʻi Island. Scientists at the University of Hawaiʻi have been monitoring the spread of ROD with great concern and are looking for solutions.

“They call it Rapid ʻŌhiʻa Death because if an individual tree dies very quickly once it gets infected you’ll see the leaves all turn brown and fall off in a couple of weeks,” said JB Friday, extension forester with the UH Mānoa College of Tropical Agriculture and Human Resources. “The extent on the island—the first places we think we started seeing it spreading was 2010, by 2012 there were hundreds of trees dying, by 2014 there were tens of thousands and now we’re talking hundreds of thousands or millions of trees.” 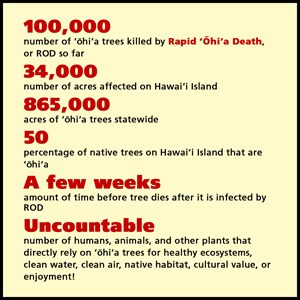 ʻŌhiʻa trees cover 865,000 acres and ʻōhiʻa is considered by many to be the most important tree in Hawaiʻi. Half of the native trees on Hawaiʻi Island are ʻōhiʻa. Native birds and tree snails, many of them endangered, live and feed on them.

“We currently have about 30 species that still exist and all but a half a dozen of those are already considered to be endangered,” said Sheila Conant, emerita professor with the UH Mānoa biology department. “Without the ʻōhiʻa forest most of those birds would have nowhere to go.”

Their canopy protects the innumerable smaller trees and native shrubs, creating the watershed that recharges our water supply.

Said Kalena Silva, professor with UH Hilo’s Ka Haka ʻUla o Keʻelikōlani, “There is an old Hawaiian proverbial saying, he aliʻi ka ʻāina, he kauā ke kanaka, the land is chief and the people are its servants. And so we remember, that the ʻōhiʻa doesn’t need us, we need it.”

University of Hawaiʻi scientists are working diligently to protect and preserve this keystone tree in Hawaiʻi’s native forest. The Seed Conservation Laboratory at UH Mānoa’s Lyon Arboretum launched a campaign in February 2016 to fund an effort to collect and bank ʻōhiʻa seeds.

The seed conservation lab has been storing native Hawaiian seeds for more than 20 years and currently banks more than 12 million seeds.

“Our mission is to help prevent extinction of Hawaiʻi’s rare plant species and seed banking is proven method to accomplish this,” said Chau.

Seeds can be stored for decades until the appropriate time where they can be reintroduced.

For more information go to gofundme.com/ohialove.

View the photos on University of Hawaiʻi Flickr album. 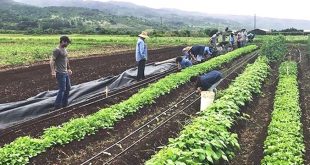 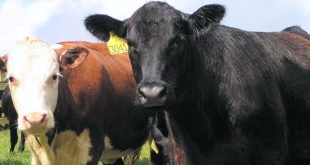