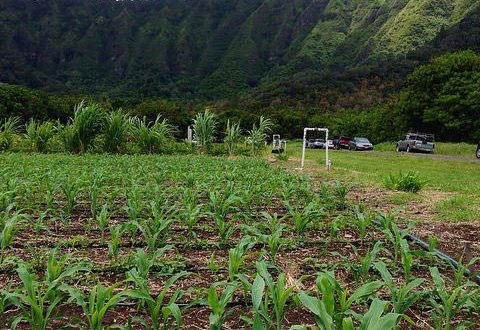 A key potential “benefit” of global warming — namely, that plants at northern latitudes will thrive in a warmer world — is challenged by a new study released by University of Hawai’i scientists.

The prevailing assumption ignores the fact that plants in the North will remain limited by solar radiation, curbing positive effects of warming and additional CO2 availability. In addition, that same warming could surpass plant temperature tolerances in tropical areas around the world, and further be accompanied by drought.

“Those that think climate change will benefit plants need to see the light, literally and figuratively,” says Camilo Mora, a professor at UH Mānoa’s College of Social Sciences and lead author of the new study. “A narrow focus on the factors that influence plant growth has led to major underestimations of the potential impacts of climate change on plants, not only at higher latitudes but more severely in the tropics, exposing the world to dire consequences.”

The new study published in the peer-reviewed journal PLOS Biology shows that ongoing climate change will lead to overall declines in plant growing days by 2100 due to a mixture of warming, drought and limited solar radiation.

Using satellite-derived data, the study identified the ranges of temperatures, soil moisture (water availability) and light (solar radiation) within which 95% of the world’s plant growth occurs today. The researchers then used climate projections to count the number of days in a year that will fall within these suitable climate ranges for plant growth in the future.

Although the study did find that warming trends will increase the number of days above freezing at higher latitudes by 7%, these same locations will remain limited by light, a trend that has been missed by previous studies that focused on temperature alone. “Regions at higher latitudes will likely have less frost and snow on the ground in the future, but many plants will not be able to take advantage of those warmer temperatures because there will not be enough sunlight to sustain their growth,” says Iain Caldwell, post-doctoral fellow at the Hawai’i Institute of Marine Biology and co-author of the study.

The same warming that appeared to be a positive influence on plant growth at higher latitudes was found to be detrimental to plants in tropical regions, where conditions will become too warm and dry for most plant growth. Overall, the entire planet could see ~11% reduction in the number of days with suitable climates for plant growth, with some tropical regions facing a reduction of up to 200 days per year by 2100.

“Although plants that have already adapted to live in extreme hot and dry conditions could fare well under a warming planet, the challenge will be for tropical agricultural and forest ecosystems to adapt to conditions that will likely surpass what they can currently tolerate,” says Jamie Caldwell, PhD candidate at UH Mānoa and coauthor of the study.

Plants also sustain human societies by providing food, fiber, fuel, jobs and associated revenue. However, they can only deliver those things when climates are suitable for their growth.

The new study goes further to assess where people will be hardest hit by the changes in the number of plant growing days and found that approximately 2.1 billion are highly vulnerable to the projected changes. These 2.1 billion people currently live in countries that depend heavily on plants for food, jobs and revenue and have minimal capacity to adapt because they are poor, yet they could lose 30% or more of their current plant-growing period.

“Climate change will have disproportional impacts on the poorest in the world,” says Micah Fisher, PhD candidate at UH Mānoa and a coauthor of the study. “Our analysis showed dramatic potential human impacts on the Sahel and on certain pacific islands. If subsistence farmers in the Sahel lose half of their growing days for plant crops, then how are they supposed to feed their families or generate income? Will they be forced to move? And worse yet, could this be cause for future conflict?”

Despite the potential for hardship under ongoing emissions, the study found that some northern regions, predominantly in China, Russia and Canada, will likely experience improved climatic conditions for plant growth.

“Our study provides important policy implications,” says Mora. “It suggests that we should make better friends with the Canadians! Not to make light of the situation, but imagine the political leverage that climate change could give to some countries if they gain the power to feed the rest of the world.”

On a more positive note, changes in suitable plant growing days were negligible under strong and moderate mitigation scenarios, suggesting that even modest reductions in emissions could prevent such drastic changes and their associated consequences for ecosystems and people.

The College of Social Sciences at the University of Hawai’i at Mānoa is engaged in a broad range of research endeavors that address fundamental questions about human behavior and the workings of local, national and international political, social, economic and cultural institutions. Its vibrant student-centered academic climate supports outstanding scholarship through internships, and active and service learning approaches to teaching that prepare students for the life-long pursuit of knowledge.