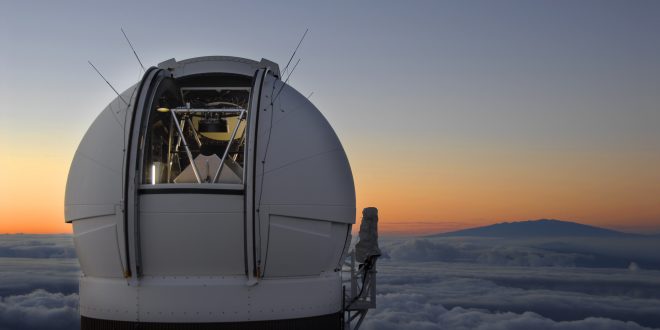 The email came in the evening of September 15. A potentially significant event had happened at the Laser Interferometer Gravitational-Wave Observatory, or LIGO, during their engineering run. A ripple in spacetime had occurred somewhere in the universe. But where? LIGO had not yet started their formal observing run, and with only two Gravity Wave detectors, one in Hanford, WA, and one in Livingston, LA, they could not pinpoint where in the sky, amongst billions and billions of galaxies, the source of this disturbance had occurred.

The LIGO team’s first analysis was preliminary, but it showed that two black holes, in tight orbits around each other, had finally spiraled together and merged into a single black hole. The resulting turmoil launched a cascade of vibrations into the very fabric of spacetime that ultimately set the astonishingly sensitive pendulums at LIGO swinging together.

Pan-STARRS, the University of Hawaiʻi’s Panoramic Survey Telescope and Rapid Response System, was prepared for this eventuality. Built by the University of Hawaiʻi’s Institute for Astronomy, the Pan-STARRS1 Telescope spent years mapping the sky to find all kinds of changing celestial objects, all the while building the most detailed map of the sky in five colors. This image of the sky, the PS1 Sky Survey, which will be released to the public this spring through the Space Telescope Science Institute’s MAST Archive, is the ideal resource for trying to find the source of the Gravity Wave Event. If “sparks” fly when black holes merge then a new point of light will be seen in the sky. Pan-STARRS, with its powerful surveying capability, can rapidly map the region of the sky identified by LIGO, compare it to the previous map and find anything that has changed.

To do this, the powerful computers of Pan-STARRS must construct a new image of the sky, and then carefully subtract the pre-existing deep sky image. Whatever remains are the objects that have changed in the universe since the map was made, called “transients.” In the large area provided by LIGO, there will be many more common variable objects like supernovae, stellar flares, highly variable stars, even variations in the active nuclei of galaxies, also fueled by black holes. The team had to eliminate the “normal” ones, and search for something truly new. But Pan-STARRS was prepared for this from its years of ground breaking work on every kind of astronomical transient.

“I’ve been interested in gravity waves since I was kid.” says Pan-STARRS Director Ken Chambers, an astronomer at the Institute for Astronomy at the University of Hawaiʻi. He jumped at the possibility to sign up with LIGO to get their email alerts. “Most people thought the odds of them finding anything were too small to spend anytime on it, but I was thrilled at the chance.” But when that email came in the night, he knew it would be hard.

The region LIGO had identified as most likely to contain the source was rising with the sun at dawn, observable only for a few minutes before the sky became too bright. With its infrared filters, PanSTARRS could observe the brightening sky for longer, and over the course of a few weeks PS1 was able to map the most important sky regions. PS1 identified 56 astronomical explosions over 41 days after the LIGO event. But what were they?

Professor Stephen Smartt, director of the Astrophysics Research Centre at Queen’s University Belfast, leader of the spectroscopic effort to follow up the Pan-STARRS discoveries, explains: “We didn’t find anything in our data that was likely related to the gravitational wave source. We discovered over 50 new sources that are normal supernovae—exploding stars that we find all the time. We didn’t see any hint of unusual behavior.”

There are two likely reasons. One is that the source was too far in the southern hemisphere, not visible from Hawaiʻi. The other is that the source may have been too faint to detect it in the time available. “That is science” says Chambers. “Sometimes all you can report is what you don’t see, because that is important information too. LIGO has opened a brand new field of astronomy and confirmation from facilities like Pan-STARRS will be very important to understanding them.”

A scientific paper describing the details of the Pan-STARRS follow-up effort has been submitted to the Monthly Notices of the Royal Astronomical Society. The limits Pan-STARRS has set for a potential counterpart will be important for constraining theories of what should have been seen and demonstrate the infrastructure is in place to respond the next time LIGO finds a gravity wave. LIGO will have another observing campaign in the fall, when PS2, the second Pan-STARRS telescope, will be ready, doubling the survey power of the system. Meanwhile, PS1 continues to map the sky every night, seeking the unknown.

—An Institute for Astronomy news release