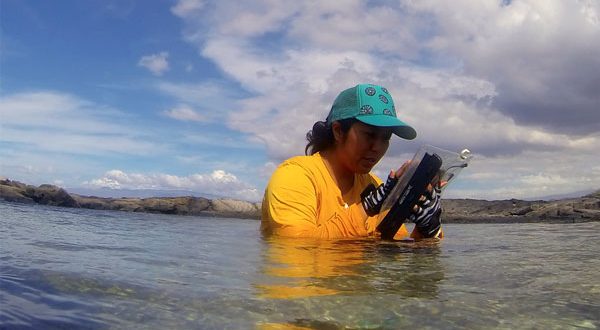 A novel waterproof electronic tablet could support community-based monitoring and conservation of coral reef ecosystems in Hawai‘i. Here, a wet test drive of a prototype version.

UH Mānoa graduate student John Burns has been selected as a finalist for the Rolex Awards for Enterprise. From a pool of more than 1,800 applicants from 129 countries around the world, Burns is one of 22 finalists.  The award is targeted to innovators under 30 years of age. The Papaikou resident is one of only three finalists from the United States.

“I’ve been working on the Big Island of Hawai‘i for several years now doing coral research,” Burns said.  “We’ve done a lot of outreach activities with different community groups because they want to know how they can monitor the ecosystems on their own.”

While the tools to follow these trends may already exist, they are typically geared toward professional researchers, and not citizen scientists, Burns says.

“While I might be interested in coral diseases, they might be interested in not just coral health, but limu [edible Hawaiian seaweed], fish populations, and maybe intertidal organisms like opihi [limpets].  Or perhaps they would like to track seasonal cycles that have to do with moon phases and fish abundance,” he said.  “There are so many parameters that they may want to monitor, but they are lacking the infrastructure that allows them to go out and do those surveys.”

Monitoring tools can be expensive and difficult to customize. What’s more, communities often lack the ability to easily aggregate data and store the observations, photos, and data that individuals collect on their own.

To tackle this challenge, Burns proposes to equip four groups on the Big Island (three on the Kona side and one in Hilo) with five novel waterproof electronic tablets each.  The tablets run a program that lets users make customized data forms that are automatically synched to a secure online database.  The same tools allow for automated data summaries, trend mapping, and graphical display of user-collected data.

In addition to long-term or ongoing monitoring, the tablets can serve an important purpose in the event of a coral disease outbreak or proliferation of harmful invasive species, Burns suggests.  Community members will be able to use the tables to take pictures and upload them directly to a database.  Time-stamped and with GPS coordinates recorded, these photos and observations can provide important evidence and a record of an event as it occurs.

“All of those different resources that cost a lot of money and are difficult for these groups to obtain, you can just put right there on a tablet,” he said.  “These tablets are relatively inexpensive – just a few hundred dollars apiece – but when you think about all of these different tools that you can put on a device, you end up saving a substantial amount of money.”

A volunteer from each community will act as a small-scale project manager, helping to manage the tablets, define the data objectives, and steer each ongoing project.

The community groups that Burns is targeting primarily serve Native Hawaiians. Many of his potential users rely on the sea for food and to support local jobs.

“Their livelihoods and a lot of their cultural practices are intertwined with these marine resources,” Burns said.  “If the resources disappear, it can also impact the culture.”

Burns is a PhD candidate in the Zoology graduate program, Department of Biology, College of Natural Sciences. He works in Ruth Gates’ laboratory at the Hawai‘i Institute of Marine Biology, part of the School of Ocean and Earth Sciences and Technology (SOEST) at UH Mānoa.  He earned his BS in Biology at California Polytechnic State University, San Luis Obispo, and an MS in Tropical Conservation Biology and Environmental Science at UH Hilo.

The winners of the Rolex Awards for Enterprise will be announced in June 2014.  Five winners will receive a monetary award of more than $56,000 to support their projects.

About the 2014 Finalists for the Rolex Awards for Enterprise:  http://www.rolexawards.com/finalists
Also, access the University of Hawaii Coral Health Atlas:  http://coralhealth.spatial.hawaii.edu/