Investigating effects of military munitions disposed of off Pearl Harbor 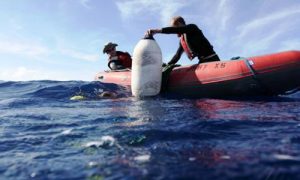 On March 29, a full array of state-of-the-art technologies including several owned and operated by University of Hawai‘i at Mānoa School of Ocean Earth Science and Technology (SOEST) will be used in the latest phase of an Army-funded research effort to further investigate sea-disposed military munitions. This research will take place south of Pearl Harbor at an area designated by the U.S. Department of Defense (DoD) as the Hawaii-05 (HI-05) site. HI-05 is a deep-water site that contains both conventional and chemical military munitions. (Consistent with an internationally accepted practice at the time, DoD disposed excess, obsolete or unserviceable munitions, including chemical warfare material, in ocean waters off the United States prior to 1970, at which time DoD discontinued this practice. Congress subsequently prohibited sea disposal of waste materials into the ocean in 1972.) UH is undertaking this research in partnership with the U.S. Army, Woods Hole Oceanographic Institution, and Environet, Inc., a local environmental consulting firm.

This effort is a continuation of previous research that used towed sidescan sonars, the Hawai‘i Undersea Research Laboratory (HURL) submersibles and remotely-operated vehicles (ROVs) to locate and assess the effects of the ocean environment on sea-disposed munitions and sea-disposed munitions on the ocean environment and those who use it. During a 15-day research program in 2009, UH researchers imaged approximately 2,500 conventional munitions and collected sediment and water samples within 2 meters of 20 conventional munitions as well as biota samples from the area containing munitions. At these distances, no munitions constituents – materials originating from military munitions including explosive and non-explosive materials, such as metals, and degradation, or breakdown products – were detected in the samples collected.

In 2012, a follow-on field program used the same tools to sample within 2 meters of likely chemical munitions. Analyses of sediment samples collected less than 2 meters from munitions show the presence of mustard agent and its degradation products. Shrimp scavenging nearby and sea stars living directly on top of munitions exhibited no trace of contamination from chemical constituents. The upcoming program will focus on these munitions to determine if there have been any changes in biota, sediment, and water chemistry while testing the ability of UH’s new ROV, Lu’ukai, to collect these samples.

“The Army supports this phase of the Hawaii Undersea Military Munitions Assessment because it believes it will close additional knowledge gaps about the potential impact of sea disposed munitions on the ocean environment and those that use it. DoD expects the results of this effort, like those of previous HUMMA phases will provide DoD and the international community significant benefits. Although this is the final phase of the Army’s planned research of this area, the Army expects its benefits will include development of more efficient procedures, improvement of its understanding of the potential effects of sea-disposed munitions on the ocean environment, and development of methods to use remotely operated vehicles to effectively study sea-disposal sites.” said Mr. Hershell Wolfe, the Deputy Assistant Secretary of the Army for Environment, Safety and Occupational Health.”

During this phase of the research, the UH Research Vessel Kilo Moana will deploy the ROV Lu’ukai to collect sediment and biological samples adjacent to selected munitions and at control sites for laboratory analysis. Chemical analysis of the samples for munitions constituents, including explosives and chemical agents, will be performed on board the ship to ensure personnel safety. The U.S. Army’s Edgewood Chemical and Biological Center is providing chemical safety and analytical support for this effort.

“The Hawaii Undersea Military Munitions Assessment, or HUMMA, has dramatically increased our understanding of what is happening at historical sea disposal sites,” stated UH Principal Investigator, Dr. Margo Edwards. “We’ve been able to bound the areas affected, characterize the method of disposal to focus on specific types of munitions, and measure the infiltration of munitions constituents into the surrounding sediments at levels on the order of parts per million. We have also collected specimens living in direct contact with the munitions, but have not found evidence to suggest that the munitions constituents are affecting them. In contrast, our research shows that several types of animals use the munitions as habitats.”

“We have been sharing the methods developed and results discovered by UH at international meetings in support of an open dialogue for a global problem,” said Edwards. In that spirit, the upcoming expedition will host observers from Australia and Europe who will gain direct experience with the approaches and tools used to investigate sea disposal in Hawaiian waters. These international partnerships support a primary goal of UH’s Hawaii Innovation Initiative (HI2) –broadly transitioning our research and knowledge to enhance global understanding.

A special peer-reviewed, public journal describing the results from HUMMA and comparing them with findings from the Baltic Sea is scheduled for publication by the end of 2014. The Army will make its report of this research publicly available once the data has been evaluated and the report has been approved. The Army does not anticipate this report being released prior to January 2015.

For further information about the project, see www.hummaproject.com.

The School of Ocean and Earth Science and Technology at the University of Hawaii at Manoa was established by the Board of Regents of the University of Hawai‘i in 1988 in recognition of the need to realign and further strengthen the excellent education and research resources available within the University. SOEST brings together four academic departments, three research institutes, several federal cooperative programs, and support facilities of the highest quality in the nation to meet challenges in the ocean, earth and planetary sciences and technologies.