Gates calls Hokulea’s worldwide voyage the single greatest study ever undertaken of the interaction between human beings and the ocean.

“In Hawaiʻi we have fantastic reefs, but there are fewer species of corals and few species of fish,” said Gates. “When we were out on the Great Barrier Reef, the coral has so many different forms and shapes. The colors are incredible, there’s just an incredible visual diversity as you look out.”

While in Australia, the crew also visited the world’s largest living reef aquarium in the Reef HQ Aquarium in Townsville. It inspired discussions about potential collaborations for the future.

“The fact that they could raise something like 70 different species of coral in a single fish tank and have it be thriving with fish and limu, it was just remarkable,” said Kane.

The University of Hawaiʻi is an education partner in Hōkūleʻa’s Mālama Hōnua Worldwide Voyage, which will cover 27 nations through June 2017. The Great Barrier Reef meetings and dives were designed to futher the Mālama Hōnua mission: taking care of our island Earth. 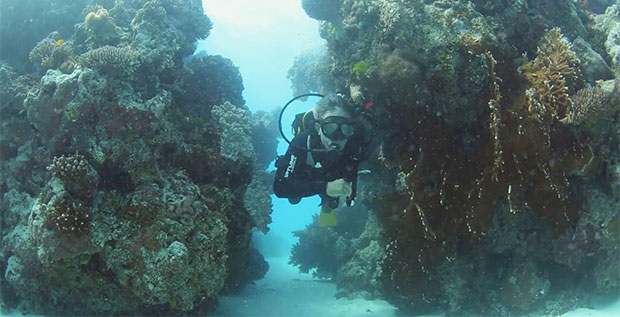