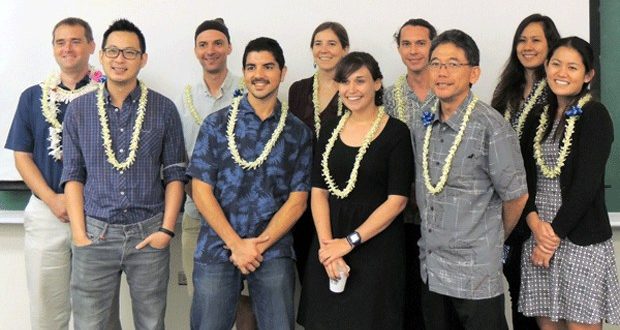 An astronomy doctoral candidate whose software automated the search for small planets has been named the ARCS Foundation Honolulu 2016 Scholar of the Year. Benjamin “BJ” Fulton received the 2016 Columbia ARCS Award in Astronomy. He was one of 12 University of Hawaiʻi at Mānoa graduate students awarded unrestricted grants from the foundation’s Honolulu chapter, which has been supporting outstanding University of Hawaiʻi doctoral candidates in STEM fields since 1974.

Fulton developed software to robotically hunt for sub-Neptune mass planets around 51 nearby stars using the Automated Planet Finder telescope at the Lick Observatory in California. He has already found two on the way to developing a census of small planets orbiting Sun-like stars within about 100 light-years of Earth. Fulton previously received a National Science Foundation Graduate Research Fellowship, UH Mānoa’s Student Excellence in Research Award and has been published five times in as many years.

Fulton beat out 11 other ARCS Scholars in contention for Scholar of the Year.

John A. Burns School of Medicine

School of Ocean and Earth Science and Technology

A totally volunteer, non-profit organization established in the post-Sputnik era, ARCS Foundation works to promote American competitiveness by supporting outstanding PhD students in science, technology, engineering and mathematics (STEM) fields and the health sciences. The Honolulu Chapter has awarded close to $2 million in unrestricted awards to about 600 UH Mānoa graduate students since 1974.