The Center for Hawaiian Studies inspires academic excellence, cultural integrity and political strength rooted in the Ea of our ancestors.

Kamakakūokalani, its faculty, classes, and program, represents Hawaiian perspectives and knowledge within the larger academy. Thus, most courses are distinctive and taught nowhere else in the world as originality is a hallmark of the curriculum. 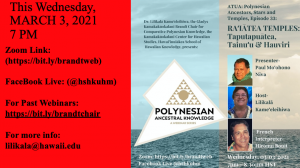 Aloha mai kākou, I  am delighted to invite you to join us this Wednesday evening, March 3, 2021 at 7 pm on https://bit.ly/brandtweb  for our 33rd Brandt Webinar focusing on RAʻIĀTEA TEMPLES: Taputapuātea, Tainuʻu & Hauviri, presented by Paul Moʻohono Niva, who is an Archaeologist and author from Raʻiātea with an MA from the Sorbonne, and who…
Mar
10
Wed
2021
7:00 pm Brandt Webinar, Polynesian Ances...
Brandt Webinar, Polynesian Ances...
Mar 10 @ 7:00 pm – 8:30 pm
Please join us on https://bit.ly/brandtweb for our 34th Brandt Webinar focusing on Tahiti Temples, with guest presenter, Paul Moohono Niva.
View Calendar
Add
Apply Today
Back To Top