Geography: Hawaiʻi is a chain of 8 volcanic islands and 124 islets located in the central Pacific ocean, 2,397 miles west of San Francisco and 5,293 miles east of Manila (Encyclopaedia Britannica, 2014d). It is the only major Polynesian island group located entirely in the northeast Pacific (Ridgell, 1995). Named after the largest of the eight major islands, the archipelago also includes the islands of Ni‘ihau, Kaua‘i, O‘ahu, Moloka‘i, Lānaʻi, Kaho‘olawe, and Maui; all are inhabited, with the exception of Kaho‘olawe. The total land area of the Hawaiian Islands is 6,468 square miles (Encyclopaedia Britannica, 2014d). 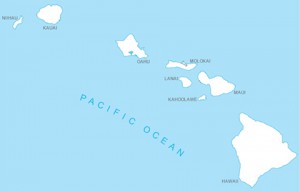 . or earlier, Polynesian voyagers from the Cook Islands, Tahiti-nui, and/or the Marquesas Islands settled in Hawai‘i, becoming its first inhabitants (Wilmshurst, Hunt, Lipo, & Anderson, 2011). By 900 C.E. trade and contact with Tahitian and other Polynesian peoples had been established. The early Hawaiian society was hierarchical, ruled by chiefs and priests who warred with each other for control of territory (Encyclopaedia Britannica, 2014d). In 1778 British Captain James Cook was the first European to visit the Hawaiian islands. Kamehameha Pai‘ea was the first Monarch of the Hawaiian islands, successfully unifying them into a kingdom in 1795. In the early 1800s American whaling fleets stopped at the islands (Encyclopaedia Britannica, 2014d). In 1820 the first missionaries arrived from Boston. The missionaries brought literacy to the Hawaiian islands, converted many people to Christianity, and acted to suppress native cultural practices such as hula (Menton & Tamura, 1999). Beginning with the missionaries, a minority of whites exerted increasing influence over the political and economic affairs of the nation, playing a role in the creation of a constitution in 1840 and the 1848 Great Mahele, or land division, which created a western-style private property system. This minority was also instrumental in the signing of a Reciprocity (or free-trade) Treaty with the United States in 1875, which benefited wealthy plantation owners (Encyclopaedia Britannica, 2014d). In 1893 the last of seven Hawaiian monarchs, Queen Lili‘oukalani, was overthrown by a small group of white Hawaiian Kingdom subjects with the help of marines landed from the USS Boston at the behest of U.S. Ambassador John L. Stevens (Menton & Tamura, 1999). After several failed attempts, Hawaiʻi was ostensibly annexed as a territory of the United States by a joint resolution of the U.S. Congress in 1898; no treaty of annexation was ever signed (Chock, 1995). The Hawaiian Homes Commission Act of 1920 created a government-sponsored homesteading program which offered land to native Hawaiians, defined as individuals with at least 50% native Hawaiian blood (Department of Hawaiian Home Lands, 2014). Hawaiʻi became the 50th U.S. state on August 21, 1959. Some scholars have argued that the 1959 statehood ballot used in the plebiscite was flawed, as it offered only two options (statehood or territorial status) and not “independence” or other “separate systems of self-government” as mandated by the United Nations (Trask, 2008). Beginning in the 1970s there was a resurgence of native Hawaiian language and customs, which continues to the present day (Encyclopaedia Britannica, 2014d).

Demographics: As of 2012, the state of Hawaiʻi had an estimated population of 1,360,300 (Encyclopaedia Britannica, 2014d). While the U.S. has no official national language, in the state of Hawaiʻi English is widely spoken and Hawaiian is an official language (Central Intelligence Agency, 2014g). One in four households in Hawaiʻi speak a language other than English at home. The most common languages spoken are Asian or Pacific Island languages, notably Japanese (4%), Tagalog (4%), Ilocano (4%), Chinese (2%), Korean (1%), Vietnamese (1%), Samoan (1%), and Hawaiian (1%). Additionally, 2% of the population speaks Spanish and 1% speaks some other Indo-European language (U.S. Census Bureau, 2010). Additionally, Hawaiian Pidgin (or Hawai‘i Creole English, HCE) is spoken by an estimated 600,000 people in the state (Sakoda & Siegel, 2003). Oahu is the most populous island with 72% of the state’s population, followed by the Big Island of Hawai’i (12%), Maui (10%), and Kaua‘i (5%). The combined population of Moloka‘i , Lana‘i, and Ni‘ihau represents less than 1% of all residents of the state (Hawai’i Visitors and Convention Bureau, 2011).

Economy: The largest industry in Hawaiʻi is tourism, which has grown steadily since World War II. Half of the hotels in the state are located in the vicinity of Waikiki, and cruise ships make regular stops at ports in the islands. Manufacturing on the islands ranges from small scale to heavy manufacturing including oil refineries, a concrete-pipe plant, and an aluminum-extrusion plant. Roughly one quarter of all workers in the state belong to a labor union (Encyclopaedia Britannica, 2014d). Although the majority of food consumed in the state is imported, there is a significant local agriculture sector producing Asian and local specialty foods, tropical fruits, coffee, macadamia nuts, and miscellaneous other crops for local consumption. Major exports include sugar, garments, flowers, and canned fish. Food, clothing, fuel, vehicles, and building materials are major imports. Hawaiʻi relies on imported fuel oil for most of its energy needs, although wind farms on Maui and O‘ahu and a geothermal plant on Hawaiʻi are examples of how the state is trying to increase the proportion of energy generated from renewable sources. The state government’s revenue comes primarily from a general excise tax, individual income taxes, and federal grants (Encyclopaedia Britannica, 2014d).

Political Affiliation: As a U.S. state, Hawaiʻi has two Senators and two Representatives in the U.S. Congress. Citizens of Hawaiʻi are U.S. citizens. Unlike other native peoples in the United States, Native Hawaiians have never been granted the right of self-governance by the U.S. federal government (Wasem, 2004).