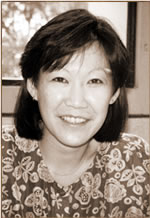 Professor Yue’s research areas include 20th Century Chinese Literature and film, comparative literary criticism, post-colonialism, feminism, and cultural studies. Her publications explore the ideological ramifications of modernity and cultural identity in a cross-cultural as well as national context. Her more recent work has begun to examine the notion of “Chineseness” and focuses on the concept of “diasporic consciousness” local Chinese writers from Hawai’i, overseas Chinese writers in the US, Asian-American literature and film, and immigrant communities in Europe. Currently, she is working on a book manuscript on the problematic of representation in 20th century Chinese literary culture while also editing a collection of her essays on issues in cultural studies.

“Between Patriarchy and Imperialism: Chinese Women Writers and the Ideology of Modernism.” Women in Hawai‘i, Asia and the Pacific, Office for Women’s Research Working Paper Series, University of Hawai’i-Manoa, 1993.

Woman and Representation: Feminist Readings in Modern Chinese Fiction 1919–1937. Diss. Stanford University, 1991. Under revision for publication as a book.