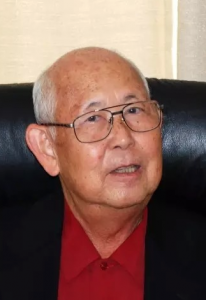 Professor Lo’s teaching and research interests center on the history of Chinese literature and traditional Chinese drama. Recently he has done work on the Pure Land sect of Chi­nese Buddhism, and delivers weekly lectures on Buddhist scripture at his home. He has also acted as a consultant on Chinese Buddhism to the Ministry of Education of Singapore for three years. Recently he was named an honorary professor of the Hebei Teacher’s College and Lanzhou University.

“Zhang-Zi and Chan Buddhism.” Bulletin of the Institute of Chinese Literature and Philoso­phy 3 (March 1993).

“The Short Poetry in the Qing Dynasty.” Chung-Wai Literary Monthly42 (March 1992). “On the Thinking of Buddha and to Call Out ‘Amitabha’ Aloud to Show Devotion.” Bul­letin of the Institute of Chinese Literature and Philosophy 2 (April1992).

“Development of Sanqu Poetry in the Qing Dynasty.” Presented at the International Conference on Chinese Studies, Singapore (June 1991).