My research interests include development of new multidentate, non-innocent, and/or chiral ligands for application in transition metal-based asymmetric catalysis, small molecule activation, and alternative energy processes. Without giving up too much information, we plan to target a largely unexplored class of C1-Symmetric, P-Stereogenic ligands, rationally designed multidentate ligands for dinitrogen reduction, and phosphaalkene-based ligands as redox active / non-innocent platforms for interesting chemical transformations. If these projects interest you, please do not hesitate to contact me or stop by my office.

Organic radicals are used by a number of enzymes to catalyze biochemical transformations with high-energy barriers that would be difficult to accomplish through non-radical heterolytic chemistry. Well known examples include the reduction of an alcohol to an alkane catalyzed by ribonucleotide reductase or carbon chain rearrangements catalyzed by methylmalonyl CoA mutase or glutamate mutase. Organic radicals can be generated in enzymes through only three general schemes: metal-activated oxygen chemistry, adenosylcobalamin chemistry, or reduction of the sulfonium of S-adenosylmethionine (AdoMet).

Enzymes that catalyze the reduction of AdoMet all contain a [4Fe-4S] cluster that interacts covalently with the methionyl portion of AdoMet. This interaction likely plays an important role in promoting electron transfer into the relatively low-potential sulfonium. We are interested in understanding how the electronic structure of the FeS cluster and the sulfonium are perturbed by this interaction, and whether electron transfer and sulfonium reduction requires a structurally specific interaction or simply close proximity.

Biotin (vitamin H) is synthesized in microbes and plants through a conserved biosynthetic pathway that generates dethiobiotin from L-alanine, pimeloyl CoA, CO2, and NH3 (from AdoMet). The final step in the pathway requires the substitution of sulfur for hydrogen at the C6 and C9 positions to create the thiophane ring. The enzyme that catalyzes this step in the reaction contains iron-sulfur clusters and is an AdoMet-dependent radical enzyme. The overall reaction catalyzed is:

In collaboration with Dr. Cathy Drennan (MIT), we have determined the structure of the enzyme from E. coli with substrates bound. On the basis of this structure, and related mechanistic studies, we have proposed that the biotin thiophane sulfur is derived from a [2Fe-2S] cluster bound within the core of the enzyme. Current studies are focused on obtaining spectroscopic evidence for a dethiobiotin-FeS cluster covalent intermediate and understanding the role of conserved protein residues in guiding this transformation. 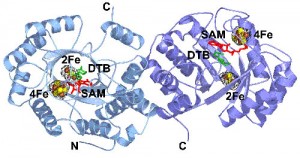 Although simple iron-sulfur clusters are spontaneously assembled in solution, virtually all known organisms contain specific proteins that function to guide the controlled assembly of [2Fe-2S] and [4Fe 4S] clusters. One of the most conserved systems for iron-sulfur cluster assembly, the ISC system, is contained within a single genetic operon in E. coli that codes for 7 proteins: a pyridoxal phosphate-dependent cysteine desulfurase that generates S0 as persulfide sulfur destined for cluster assembly (IscS), two possible scaffold proteins that can bind either [2Fe-2S], [4Fe 4S], or Fe2+/3+ under various experimental conditions (IscU and IscA), a ferredoxin for redox control (Fdx), and an ATP-dependent chaperone/co-chaperone pair that may assist in folding/unfolding or cluster transfer (HscA and HscB).

We have found that the chaperone HscA and the scaffold IscU will form a complex with several apoproteins that are targets for FeS cluster transfer. Our current studies are focused on cluster assembly in biotin synthase, which is stably folded in the apoprotein state, and where correct cluster assembly can be distinguished from indiscriminant assembly by the ability of the resulting protein to form biotin. Current studies focus on using spectroscopic methods to characterize the state of the FeS cluster prior to and during the cluster transfer process.

Despite the long history of drug discovery from natural sources, the marine environment is still relatively untapped. Covering 70% of the Earth’s surface, the oceans contain all major phyla. The resulting intense competition for space and resources drives the evolution of specific and potent chemical defenses distinct from their terrestrial counterparts.

My research interests center on the discovery and evaluation of these small molecule chemical defenses from marine sources as potential drug leads for the treatment of cancers and Alzheimer’s Disease.

In collaboration with the other members of the Natural Products Cancer Biology program, marine extracts are screened against a variety of relevant cancer targets. The active constituents are then isolated using a combination of bioassay data and repeated separations. The structures of these metabolites are then determined primarily through the use of high-field NMR spectroscopy and chemical degradation.

Modern structure determination of small molecules still remains a challenging problem. The number of structural reassignments reported each year is testimony to the myriad of potential pitfalls. While classical approaches to structure determination rely heavily on chemical degradation, most modern approaches use non-destructive techniques to provide the same connectivity information. Any structure determination encompasses three discrete assignments: planar, relative and absolute. Advances in NMR instrumentation and NMR pulse sequences have greatly simplified the assignment of the planar structure, i.e., the constitutional connectivities between the various nuclei. Conversely, relative and absolute stereochemical assignments are becoming more challenging as the isolation of submicromolar quantities of metabolites becomes increasingly more common. Consequently, my group focuses on developing new methodologies for stereochemical determinations on small scale.

More information about the Williams Research group can be found here