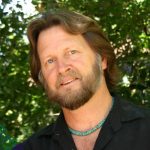 Christopher (Toby) McLeod has been Project Director of Earth Island Institute’s Sacred Land Film Project since 1984. In 2013, he completed the four-part series Standing on Sacred Ground, which premiered on public television in April 2015. Previously, Toby produced and directed In the Light of Reverence (2001) and made three other award-winning, documentary films that were broadcast on national television: The Four Corners: A National Sacrifice Area? (1983), Downwind/Downstream (1988), and NOVA: Poison in the Rockies (1990). In 1997, he completed A Thousand Years of Ceremony, a 40-minute profile of Winnemem Wintu healer Florence Jones and her efforts to protect Mount Shasta as a sacred site—a film made specifically as an archival film for use by the Winnemem. After 10 years of work, In the Light of Reverence, was broadcast in August 2001 on the acclaimed PBS series P.O.V. (Point of View) and won a number of awards, including the Council on Foundation’s prestigious Henry Hampton Award (2005). His first film was the nine-minute short,The Cracking of Glen Canyon Damn—with Edward Abbey and Earth First! McLeod has a master’s degree in journalism from U.C. Berkeley and a B.A. in American History from Yale. He is a journalist who works in film, video, print and still photography. In 1985, McLeod received a Guggenheim Fellowship for filmmaking, and his U.C. Berkeley masters thesis film Four Corners won a Student Academy Award in 1983. Toby has been working with indigenous communities as a filmmaker, journalist and photographer for more than 35 years.