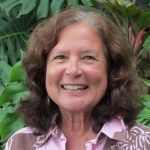 Bio: Professor McGregor is founding member of Ethnic Studies at the University of Hawai’i, Manoa, is a historian of Hawai’i and the Pacific. Her PhD in Hawaiian and Pacific History was completed at the University of HawaiʻI, Mānoa in 1989. Her ongoing research endeavors document the persistence of traditional Hawaiian cultural customs, beliefs, and practices in rural Hawaiian communities, including the island of Moloka’i; the districts of Puna and Ka’u on Hawai’i; Ke’anae-Wailuanui on Maui and Waiahole-Waikane on O’ahu. This work is featured in her 2007 UH Press book, Kua’aina: Living Hawaiian Culture which won the Kenneth W. Balridge Prize for best book in any field of history written by a resident of Hawai’i from 2005-2007.

Projects: Pōmaikaʻi is conducting research on the original Native Hawaiians who lived in Kalaupapa, Kalawao, Makanalua and Waikolu before it was designated as a place to isolate HawaiʻI residents who contracted leprosy. She is part of a team working on the designation and implementation of the Moʻomomi Northwest Coast of Molokaʻi as Community-Based Subsistence Fishing Area (CBSFA). As a member of the Protect Kahoʻolawe ʻOhana, she helps to steward the island of Kanaloa Kahoʻolawe. She helps to coordinate huakaʻi or cultural field trips for students, faculty and community members to engage in cultural and spiritual practices to heal the island and honor it as a sacred center for learning and mastery of Native Hawaiian cultural beliefs, customs and practices.