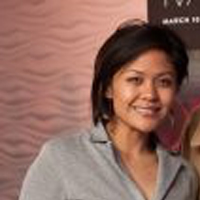 Since graduating, Theresa Navarro (M.A.) has embarked on a whirlwind career as a film and television producer.  She has worked on several independent fiction and documentary projects, including the sci-fi feminist feature ADVANTAGEOUS which won a Special Jury Prize for Creative Collaboration at this year’s Sundance Film Festival.  She is currently employed with the Emmy-nominated public television documentary series americareframed.com.  “AMERICAN REFRAMED” is the sister series of the long-running documentary series POV, and is co-produced with WGBH/WORLD Channel in Boston.  She continues to consult on creative and community education projects.  She is currently co-producing a transmedia documentary (withwingsandroots.com) that explores global migration using a comparative lens on the U.S. and Germany.  The project consists of curated collection of interviews), and educational workshops.  She has also pursued what she calls her “passion project” with the Filipino American Museum (FAM): filipinoamericanmuseum.com.  Now in its second year, FAM just completed a three-day reading of Jose Rizal’s NOLI ME TANGERE, which featured Jessica Hagedorn, Broadway’s Jose Llana, Harold Augenbraum.