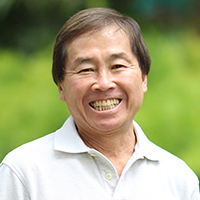 Dr. Ogawa received his Ph.D. from UCLA in 1969 where he was honored as one of the founders of the UCLA Asian American Studies Center. He is a professor and former Chair at the University of Hawaii, American Studies Department and his teaching and research interests are in the area of Japanese American Studies, Television and Ethnic Identity, and Multicultural Studies. He has also served as a visiting professor at the Gakushuin University, Japan. Professor Ogawa’s books (a number of which are best sellers for the University of Hawaii Press) include JanKenPo: The World of Hawai’i’s Japanese Americans, Kodomo No Tame Ni – For the Sake of the Children, and The First Nisei. Among his honors are the Imperial Decoration Order of the Rising Sun, Gold Rays with Neck Ribbon, the Honpa Hongwanji Mission of Hawaii’s Living Treasure of Hawaii Award, the Consulate General of Japan Commendation Award, the Japanese Cultural Center of Hawaii’s Achievement in Leadership and Education CLAD Award and Hawaiian Historical Society’s title of distinguished historian. In recognition of Professor Ogawa’s excellence in research, he has been invited as a Senior Fellow for both the East-West Center and the Japan Society for the Promotion of Science.