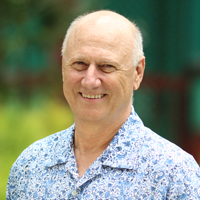 William Chapman is Director of the Graduate Program in Historic Preservation and Professor in and Chair of the Department of American Studies at the University of Hawai‘i at Mānoa. Educated at Columbia (M.S. in Historic Preservation, 1978) and at Oxford University in England (D.Phil. in Anthropology, 1982), he specializes in architectural recording, the history of historic preservation, and materials conservation. A four-time Fulbright scholar and American Candidate at the International Center for Study of the Preservation and Restoration of Cultural Property in Rome (ICCROM), he has traveled extensively throughout Southeast Asia and has served as a lecturer at Silpakorn, Kasetsart, and Chulalongkorn Universities in Thailand and at the Royal University of Fine Arts in Phnom Penh, Cambodia. He is a frequent contributor to UNESCO projects and is a member of the ICOMOS (International Council on Monuments and Sites) International Scientific Committees on the Theory and Philosophy of Conservation and Restoration and on Vernacular Architecture. Widely published in scholarly journals, he has also written on subjects ranging from the historic Volcano House Hotel in Hawai‘i to the Wright Brothers National Memorial at Kitty Hawk, North Carolina. His most recent publication is Ancient Sites of Southeast Asia: A Traveler’s Guide through History, Ruins, and Landscapes (Bangkok: River Books, 2017). Chapman served for eight years as member and chair of the Hawai‘i Historic Sites Review Board and plays an active role in historic preservation in the state. In 2011, he received the Frank Haines Award for Lifetime Contributions to Historic Preservation from the Historic Hawai‘i Foundation. In 2016 he was elected a Fellow of the Explorers Club of New York in recognition of his many projects abroad.